On August 1, 2017, Microsoft released the latest update for Office 2016 (MSI installations; version 16.0.4549.1000). This update (KB4011051) includes a bug that causes the eXtyles Paragraph Styling palette and the Auto-Redact dialog to crash. When you click the Style Paragraphs button or the Auto-Redact button, the respective dialogs fail to load. All other eXtyles features continue to function.

The corresponding update for Office 365 and Office 2016 Click-to-Run installations (Version 1707, Build 8326.2058) was first released towards the end of July; the date of this update depends on the user's Update Channel.  In these versions of Word, only the Paragraph Styling palette is affected by the update.

Some users have also reported the following error message when launching the Cleanup dialog: 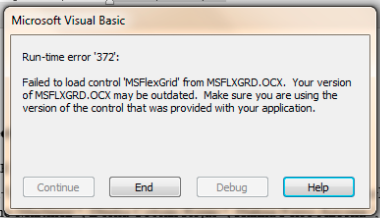 Run-time error 372: Failed to load control 'MSFlexGrid' from MSFLXGRD.OCX.
Your version of MSFLXGRD.OCX may be outdated. Make sure you are using the
version of the control that was provided with your application.

The specific file that introduces this issue has been identified (C:\Program Files\Microsoft Office\root\vfs\SystemX86\mscomctl.ocx) and reported to the Microsoft Team.

On August 22, Microsoft released an update for MSI installations of Office 2016. We have confirmed that this update resolves the bug and does not impact other eXtyles functions.

Please note that the update on the Microsoft Download Center applies to the Microsoft Installer (.msi)-based edition of Office 2016. It doesn't apply to the Office 2016 Click-to-Run editions, such as Office 365. Not sure which version you are using? See "Is my Office Click-to-run or MSI-based?" at the bottom of this article.

Solution for Office 365 and Click-to-run

On August 25, Microsoft began rolling out a new update for Office 365 and Click-to-run installations of Office 2016. We have confirmed that this update resolves the bug and does not impact other eXtyles functions.

If this update is not available to you, you can force the update through the Command Prompt by doing the following:

Is my Office Click-to-run or MSI-based?

Did you find it helpful? Yes No

Can you please tell us how we can improve this article?